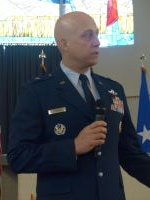 Christine Schneider the President of the GAIWC got sick I am speaking on her behalf. Brigadier General Olson , Herr Kiefer

Today we remember and honor again the babies from Families, who left their little baby in Kaiserslautern with confidence. We always think about their grief.

The GAIWC has been looking after the grave area since 1961.

The city of K-Town provided the land and helped with the costs. It was and is a great symbol of compassion and close friendship.

In 1986 the foundation started under the lead of the Ramstein Chief’s Group with so many volunteers who  care. This is highly recognized and praised by visitors to the cemetery. 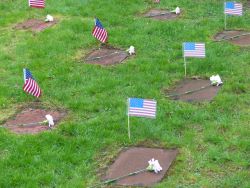 The grief of the parents continues to this day in some families and other siblings. I’m just thinking of the Petyo family. We also met other families and parents who were looking for the graves. It was always a very emotional and touchy feeling.

Thanks to the volunteer helpers, families with children, whom the Ramstein Chief’s Group motivates again and again. It is such an intensive symbol of love.

The GAIWC thanks  Msgt Marc Gonsalves, the Boys Scout and the Girl Scouts for their commitment. But I would like to thank the cemetery ofiicials Herr Schaan and Herr Hartung for the continuous  help.

(Now we will face another task, the grave stones have to be renewed.  We want to find private donors.)

I thank all of you for helping the GAIWC keeping the promise  to honor the little angels.

History of the Kaiserslautern Kindergraves

From 1952 to 1971, 452 American infants who died at birth or shortly after birth at the American military hospital at Landstuhl or at nearby civilian hospitals, were buried in the Kaiserslautern main cemetery (Waldfriedhof) adjacent to the U.S. Army Daenner Kaserne.  Members of the German-American Women’s Club knew of the graves and maintained them early on.  In the 1980’s, the cemetery management contacted the ladies and informed them the initial lease was expiring and the remains of the American babies would be removed, in accordance with local custom, to make room for cemetery expansion.  The women’s club was determined to save the children’s graves from extinction and appealed to the local Air Force base legal office for help, however they determined the military could not do anything.  The club then appealed to the U.S. State Department.  They too determined that they had no authority in the matter.

After the German authorities realized the steadfast position of the women’s club, the cemetery management agreed to allow a private organization directly affiliated with the military to assume responsibility for the gravesites.  The Ramstein Area Chiefs‘ Group (US Air Force E-9’s) assumed this role.  The cemetery management agreed to move the gravesites to a new area in the heart of the cemetery and drafted a new lease.  The Ramstein Area Chiefs‘ Group now serves as the entrusted agent for the lease.  The US Army Command Sergeants Major Association also supports the activities.

The Kaiserslautern Kindergraves Memorial Foundation (KKMF) was established in 1986 and its purpose is to maintain the memorial site, organize ceremonies in remembrance of the children and be a conduit of information for family inquiries.  Representatives from the Ramstein Area Chiefs‘ Group and the German-American and International Women’s Club serve as co-chairs for the foundation.

Each spring following Mother’s Day, a memorial ceremony is sponsored by the KKMF in cooperation with the Kaiserslautern Military Community and Kaiserslautern city officials.  Floral wreaths are placed at the front monument and a candle lighting ceremony takes place in memory of the children.  A flower and an American flag are placed at each grave marker.  The Air Force Jr. ROTC Color Guard leads the procession to the gravesite.

The KKMF receives no funding from the US government.  The upkeep of the Kindergraves is possible through the generous monetary donations of the local community.  The Ramstein Area Chiefs‘ Group designate organizes volunteers to accomplish year-round maintenance (grass cutting, edging, trimming and stone cleaning).

The last lease expired in 2011 and a ceremonial signing of a new lease took place as part of the ceremony in the 2011 ceremony.  It was signed by a RACG and a city representative.  The new 25-year renewal cost 6,800 Euro. Funds were reserved in a private account to pay the lease.